Man vs. Food is a food reality T.V. series that premiers on the Travel Channel. Adam Richman, Man vs. Food’s host, is a an actor and food enthusiast who travels to local restaurants within the United Sates to conquer pre-existing food challenges. These challenges range from scarfing down a monstrous burger to eating the spiciest chicken wings within a designated time without drinking.

Just recently, Adam Richman and crew traveled to Rapscallions, a caribbean resturant in Land O’ Lakes Florida,  for the taping of a soon to be aired Man vs. Food episode. The challenge was to conquer ten crazy spicy wings within thirty minutes followed by a five minute after burn without drinking a drop of liquid.  The challenge is also know as The Rapscallions Davy Jones Challenge. The signature recipe and sauce is made by none other than my brother and sister in-law, James and Shael Morgan, who also run Rapscallions.

There were several challengers who sat down and cried their flustering red face out before ever finishing the firey hot Davy Jones wings, but among one of the biggest challengers was Jerry Sags. Sags is a professional wrestler and a team member of the famous tag team known as The Nasty Boys. Sag’s tag team partner,Brian Knobbs, was also there for every bite along with the roaring greater Land O’ Lakes crowd cheering him on.  (The picture above is of both The Nasty Boys and myself, Davie Ferraro).

To maintain his health while indulging in such food challenges, Adam Richman tries his best to exercise twice a day and to always stay hydrated by drinking plenty of water. After trying to body slam each food challenge, you could probably find Adam on a treadmill battling the after effects previously consumed. Due to the tight security, we were not allowed to take pictures with Adam individually, but Adam did spend a few moments before the challenge started taking snap shots from  afar. My goal was to get Adam to pose flexing his arms, but all I got was a simple thumb flex (picture above). How awesome would it be to team up with Adam after the Man vs. Food Series ends and get him to become a fat burning/lean muscle building machine by adopting The Hunt Strong Lifestyle?  That would make for a great testimony!

Thank you Travel Channel and “Man vs Food Nation” for choosing Rapscallion’s Davy Jones challenge as a contender! Adam Richman and his crew were amazing and The Nasty Boys’ Sags was a great challenger. It was really neat to see all the behind the scenes footage and how they make it happen. I can’t reveal the outcome, but what I can tell you is that it did get Nasty! The new series starts June 1st and hopefully Man vs. Food’s visit to Raps will be the season premier. 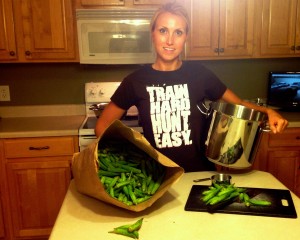 Don’t Gobble Till You Wobble