After one month on The Hunt Strong Program, Michael and Beth Lee go Pope & Young in the results category. Sticking to the program can be tough at times but they have made great choices such as ordering a salmon salad at a nearby pizza joint while others within their party chowed down on well…… you get the point. They have adapted their lifestyle and it is definitely showing, especially from the comments from others. Even being on the road attending expos and turkey/hog hunting, they have properly prepared themselves for success. 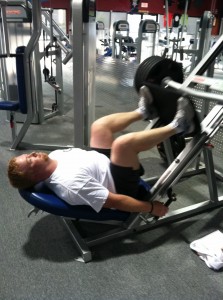 Michael Lee, Backwoods Life Co-host and Producer, has lost a total of 34 lbs.since February first. Michael had initially started the Hunt Strong Program 1 month prior to me completing his first evaluation which includes body fat measurements and Circumference measurements. Since the beginning of March to the beginning of April, Michael has dropped 3% body fat and has increased his lean muscle mass by 12 pounds, making him much more efficient at chasing down game in the backwoods. Since Michael has lifted weights in the past and competed at the collegiate level, as predicted, I knew he would put on some lean muscle mass at a faster rate than the average male due to muscle memory. 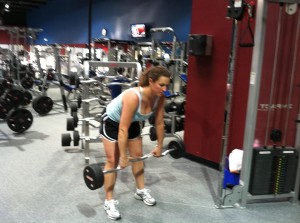 Beth Lee, also dropped 3% body fat (equivalent to 5 lbs. of body fat) and gained an impressive 6 lbs. of lean muscle mass. Beth also lost a total of 10 inches off of her huntress physique resulting in the looseness of how her clothes fit. Beth is well on her way to making significant gains and becoming overall more fit to hunt.

How did they accomplish these great results? There is no magic pill or magic fruit they are consuming, it’s implementing the right formula by means of progressive weight training, cardiovascular training, and a sound nutritional plan all supplied by Hunt Strong. They are both doing great and holding themselves accountable to one another, not to mention the accountability from me, Davie Ferraro. Michael and Beth Lee don’t just hunt, they Hunt Strong! Keep up the great work! I can’t wait to see their results in the future.