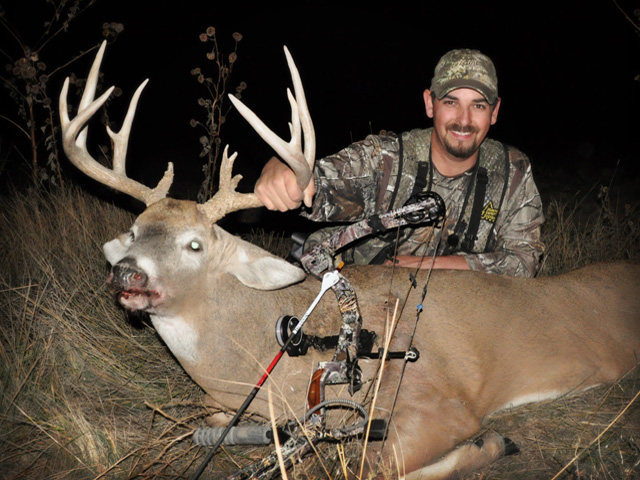 The BackwoodsLife TV Producer and Co-Host, Kevin Knighton, takes on the Hunt Strong Lifestyle. Kevin is an avid outdoors-man who knows how vitally important it is to be physically fit to take on the elements of the Backwoods. Kevin sent me an e-mail with the subject line, “Out of Breath and Tired of It”. In his e-mail, he mentioned how he would struggle each time he climbs a tree and he is tired of his body fat slowing him down. Kevin, without a doubt, is an excellent hunter and shot. The proof is on their TV show, The BackwoodsLife, which aires on the Pursuit Channel.

After exchanging e-mails and phone calls, we finalized a time to meet and get Kevin started well on his way to Hunt Strong.  We measured his body fat, took circumference measurements, tested his muscular strength and endurance, and performed some tests shooting his Elite Bow. This will be a baseline for us to see how Kevin progresses. Kevin weighed in at 222.8 lbs. with a body fat of 22.8%. In other words, Kevin has 50.8 lbs. of body fat and 172 lbs. of lean muscle mass. Our goal is to make him a more efficient hunter by increasing his lean muscle mass and reducing his overall body fat, while at the same time, increasing his strength and endurance. We will use his scale weight as a unit of measure, but it will not tell us the true results he is earning.

Kevin performed a total of 23 push ups using correct form in a one minute, which was more than he thought he could do, and 18 sit ups in a minute too. It won’t be long and Kevin will be performing 20 push ups at the drop of a hat. You have my permission to test him on that if you see him at a show. Sorry Kevin, it will just make you better. Check out Kevin as he just finished his push ups and sit ups. 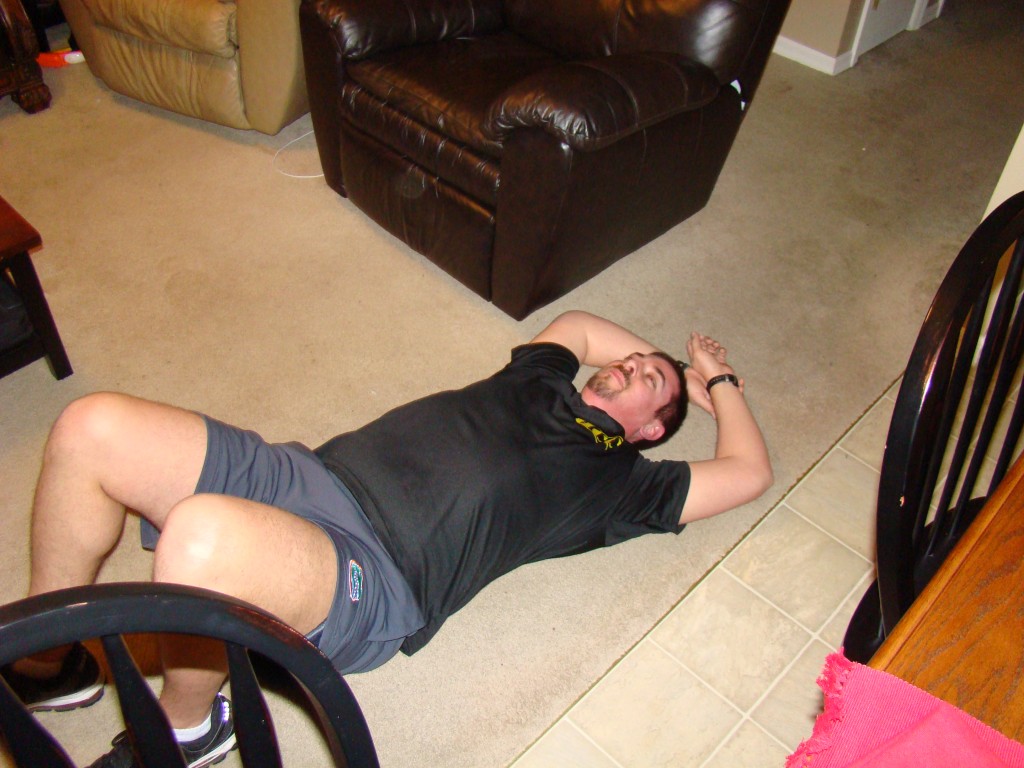 Kevin and I went outside to put his archery skills to the test. He performed 3 different tests, invloving him shooting his bow at 20 yards. Test #1: Shoot a total of 3 shots with the heart rate not elevated, just as though you were practicing on your own. All three of Kevin’s shots were in the bulls-eye just as Kevin and I expected. Test #2, Elevate the heart rate to mimic the adrenaline flow as you take aim on trophy game!  Kevin performed as many push ups as he could and then immediately pick up his bow, drew, and released. His first shot was off a little and as he began to catch his breath, he dialed in closer to the center of the bulls-eye with the two remaining shots. Test #3, Draw back and hold for 2 minutes and then release. You never know when you may have to hold your draw before you rest up on the vitals. The first 30 seconds were easy, but as time continued, Kevin began to shake more and more. Once he hit the 2 minute mark, I said release and Kevin did so. What was the result? Lets put it this way, Kevin would have hit the vitals resulting in a clean kill, but the deer may have spooked due to the shaking of the muscles. Every shot Kevin took was never outside of the 2 inch circle. That is a true testament of how much he practices and perfects his shooting capabilities.  As Kevin gets in better shape, this test will become easier and will help him increase his odds on a trophy.[cincopa AkMAHfKAo-So]

To the gym we go! Since I will not be able to accompany Kevin on all of his workouts, we went to the gym so that I could see what equipment we had to work with and to demonstrate each exercise correctly utilizing proper form. As we went through each exercise, Kevin also performed a set on each. Needless to say, Kevin was tired, but he did awesome.[cincopa AICANfaao6b2]

To achieve optimal results, you must eat optimally too! Kevin and I sat down and went through the Hunt Strong Nutritional Program that will guarantee him results. Kevin also signed the Hunt Strong Pledge, so if y’all see Kevin eating junk food, let him have it. [cincopa A8HAof6foWa_]

I am extremely excited to team up with Kevin and watch him Hunt Strong in the near future. Kevin has the right mindset, which will lead him to success. Stay posted as I keep you up to date with Kevin’s progress as he improves his overall physique.I hope those thunder chickens don’t have internet, cause the bases are loaded and Kevin Knighton is stepping up to the plate! I can sure promise you, he will be swinging for the fence…………..Grand Slam! Hunt Strong, Train to Hunt!

BackwoodsLife’s Michael Lee is NEXT! 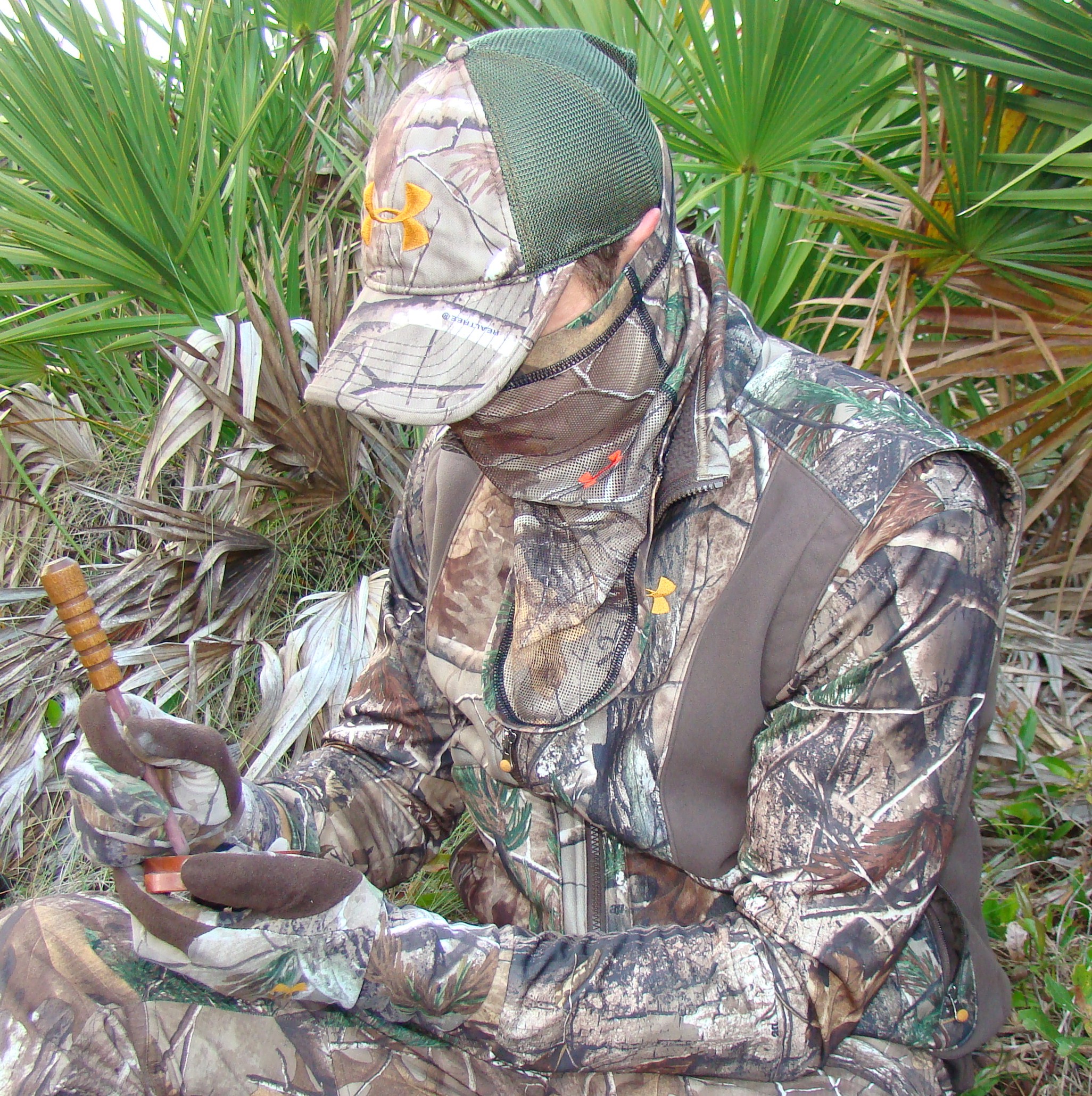